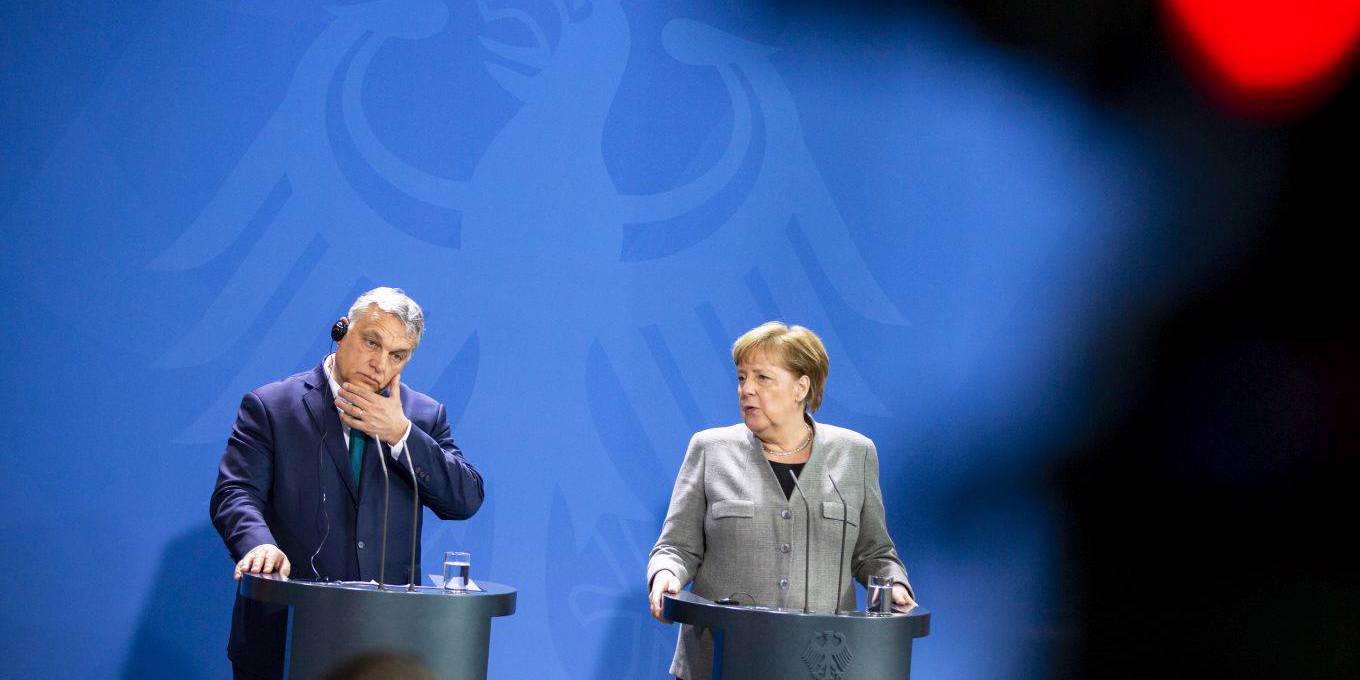 The Costs of Merkel’s Surrender to Hungarian and Polish Extortion

German Chancellor Angela Merkel has been laboring under enormous pressure to prevent a veto of the European Union’s 2021-27 budget and COVID-19 recovery fund. But the compromise she reached with Hungary and Poland is the worst of all possible worlds.

NEW YORK – The European Union is facing an existential threat, and yet the EU’s leadership is responding with a compromise that appears to reflect a belief that the threat can simply be wished away. Prime Minister Viktor Orbán’s kleptocratic regime in Hungary and, to a lesser extent, the illiberal Law and Justice (PiS) government in Poland, are brazenly challenging the values on which the European Union has been built. Treating their challenge as a legitimate political stance deserving of recognition and a compromise solution will only add – massively – to the risks that the EU now faces.

I recognize and understand the enormous pressure under which German Chancellor Angela Merkel has been laboring. She has been Germany’s chancellor for 15 years and is now approaching retirement, in September 2021. With French President Emmanuel Macron temporarily distracted by the laïcité issue and other serious security concerns within France, Merkel has become something of the sole main decision-maker for the EU.

I also understand why the German chancellor does not want another country, Hungary, to announce its intention to leave the EU on her watch. That is reportedly what Orbán was preparing to do in recent days, because he cannot afford to have the sheer scale of his regime’s corruption exposed, which the EU’s “rule of law” conditionality for the disbursement of Union funds would invariably have done.

Orbán has stolen and misappropriated vast sums during his decade in power, including EU funds that should have gone to benefit the Hungarian people. He cannot afford to have a practical limit imposed on his personal and political corruption, because these illicit proceeds are the grease that keeps the wheels of his regime turning smoothly and his cronies in line.

Threatening to torpedo the EU’s finances by vetoing its budget was a desperate gamble on Orbán’s part. But it was a bluff that should have been called. Unfortunately, Merkel has, it appears, caved in to Hungarian and Polish extortion.

As I write, it seems clear that Merkel has brokered a compromise with Orbán and Poland’s de facto leader, Deputy Prime Minister Jarosław Kaczyński. The deal that Germany made with the EU’s two rogue member states, however, constitutes the worst of all possible worlds. The widely leaked text of the proposed compromise, to be embedded in the concluding statement of this week’s European Council meeting, has three fundamental flaws.

Second, some provisions in the deal serve to delay the implementation of rule-of-law conditionality by up to two years. That would be a true coup for Orbán, as it would delay any possible action until after the next scheduled Hungarian parliamentary elections in 2022.

The reprieve would give Orbán’s Fidesz party ample time to change Hungarian laws and constitutional provisions, and allow Orbán to continue redefining what constitutes “public funds” in Hungary in ways that enable him to channel ill-gotten loot from public bodies into private “foundations” controlled by his cronies. The primary victims of the deal that Merkel has reportedly struck with Orbán will be the people of Hungary.

Lastly, the proposed summit declaration is a case of the European Council acting beyond its authority in constraining the European Commission’s ability to interpret and act on agreed EU legislation. That is a dangerous precedent, because it reduces the Commission’s legal independence and may very well contravene the Treaty on European Union, at least in spirit.

All I can do is to express the moral outrage that people who believed in the EU as the protector of European and universal values must feel. I also want to warn that this compromise may severely dent the hard-won confidence that the Union’s institutions have gained through the creation of the recovery fund.

George Soros is Chairman of Soros Fund Management and the Open Society Foundations. A pioneer of the hedge-fund industry, he is the author of many books, including The Alchemy of Finance, The New Paradigm for Financial Markets: The Credit Crisis of 2008 and What it Means, and The Tragedy of the European Union: Disintegration or Revival?His most recent book is In Defense of Open Society (Public Affairs, 2019).

This website uses cookies to improve your experience while you navigate through the website. Out of these, the cookies that are categorized as necessary are stored on your browser as they are essential for the working of basic functionalities of the website. We also use third-party cookies that help us analyze and understand how you use this website. These cookies will be stored in your browser only with your consent. You also have the option to opt-out of these cookies. But opting out of some of these cookies may affect your browsing experience.
Functional
Functional cookies help to perform certain functionalities like sharing the content of the website on social media platforms, collect feedbacks, and other third-party features.
Performance
Performance cookies are used to understand and analyze the key performance indexes of the website which helps in delivering a better user experience for the visitors.
Analytics
Analytical cookies are used to understand how visitors interact with the website. These cookies help provide information on metrics the number of visitors, bounce rate, traffic source, etc.
Advertisement
Advertisement cookies are used to provide visitors with relevant ads and marketing campaigns. These cookies track visitors across websites and collect information to provide customized ads.
Others
Other uncategorized cookies are those that are being analyzed and have not been classified into a category as yet.
Necessary Always Enabled
Necessary cookies are absolutely essential for the website to function properly. These cookies ensure basic functionalities and security features of the website, anonymously.
SAVE & ACCEPT