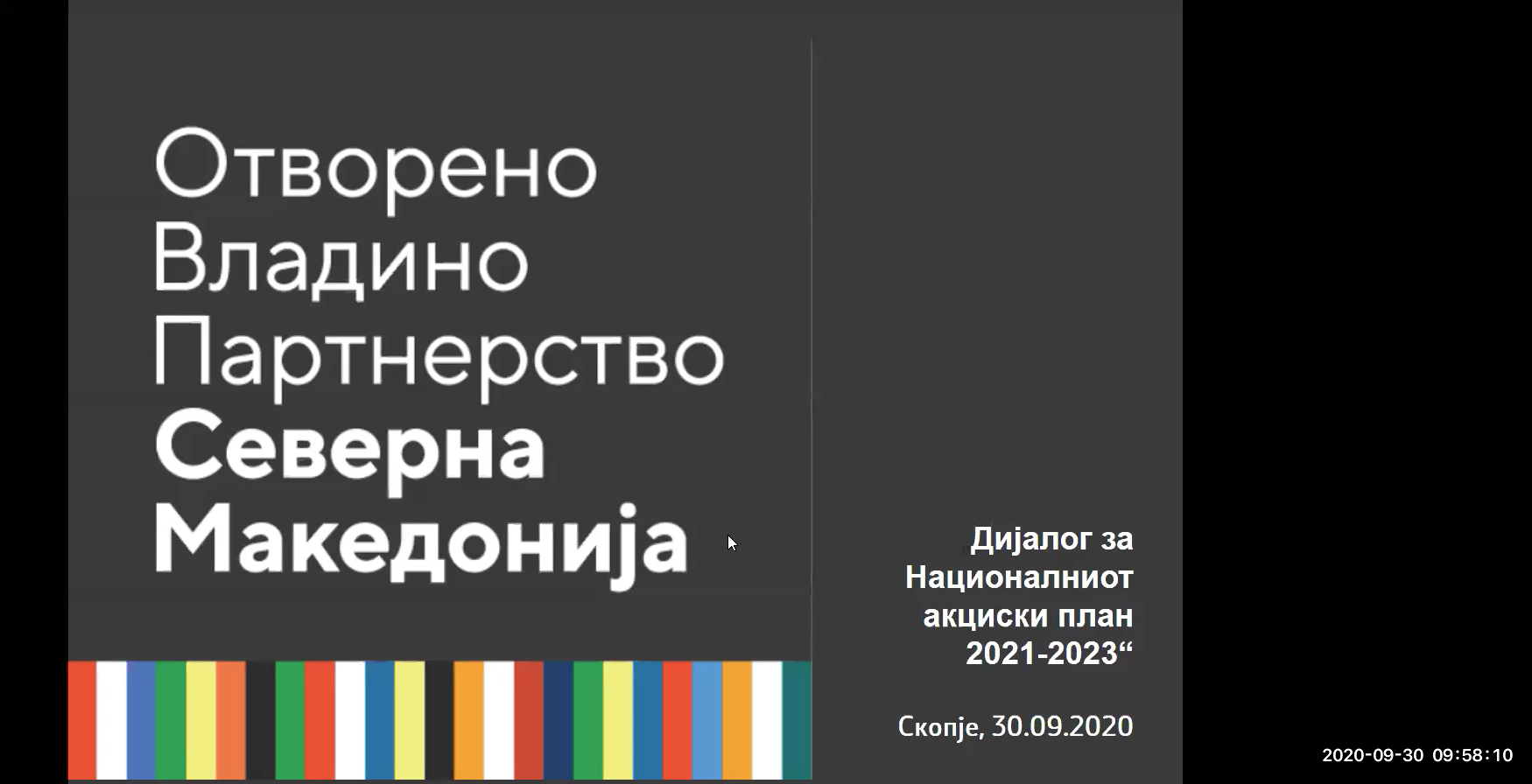 Republic of North Macedonia is part of the global initiative called Open Government Partnership, an international platform that fosters cooperation between state institutions and the civil society to ensure transparency and accountability of governments before their citizens. In line with commitments assumed, thus far North Macedonia has adopted four OGP Action Plans (in 2012, 2014, 2016 and 2018 respectively) and in the next six months the country will work on creating its fifth OGP Action Plan 2021 – 2023 under a process that is expected to involve all stakeholders. The conference was opened by the Minister of Information Society and Administration, JETON SHAQIRI, who underlined the fact that in the last several years the Republic of North Macedonia has achieved progress in areas that contribute to attainment of the underlying principles of the Open Government Partnership. A series of activities had been taken to build partnership relations with citizens and companies in respect to shaping national policies and drafting national legislation, strategies and initiatives. According to the Minister of Information Society, this approach inevitably yields good results and quality legislative solutions, while advancement of all mechanisms that guarantee participation and partnership relations between institutions and the civil society, which serve as basis for building democratic society, remains a high priority.

Deputy Secretary General of the Parliament of RNM, MIKI MILKOVSKI, stressed that the Parliament, as institution, is open to the public, which is also one of key strategic objectives on the basis of which the Parliament had decided to join the Open Government Partnership. At the same time, the Parliament’s Revised Strategy Plan 2020-2022 and the establish strategy objective defined as “open parliament” serve as clearly expressed commitment to open governance and participation in the Open Government Partnership. Additionally, strategic objectives include promotion of the culture of openness, engaged and informed public and vulnerable categories of citizens, improved parliamentary channel, website that is easy for browsing, proactive use of the social networks, and transparent legislative branch of government in respect to its budget.

It is important that institutional awareness is being developed among employees about the need for greater openness of this institution and about associated benefits.

PAUL MAASSEN, Chief, OGP Country Support, expressed genuine appreciation for all achievements made thus far and for progress achieved since the country joined the OGP initiative in 2011. Having in mind the specifics of times we are living in and the different crises we are facing, including health, economic, but also crisis of democratic processes and crisis of trust in institutions in general, the OGP initiative is faced with major challenges. Since its formation, the OGP aimed to create conditions for open government that will result in more efficient and effective government that enjoys greater trust. In 2020, these commitments remain a priority, especially amidst the Covid-19 pandemic and disturbed democratic processes at global level. The ambition to create a government that truly serves its citizens, while citizens remain active long after the elections, is a simple but wonderful idea.

“The country’s progress is evident and we are glad that governmental reforms tied to the open government as concept are integrated in the Government’s Plan 2020-2024 and the fact that the Government is committed to the idea of the Open Government Partnership”, stressed Maassen and welcomed reforms such as fiscal transparency and civil society participation in decision-making. However, he also underlined that there is always space for improvement, and in that regard, the authorities must set several seriously ambitious objectives in the new OGP Action Plan. As the tenth anniversary from RNM’s cooperation with OGP approaches, it is especially important for the authorities in North Macedonia to ensure seriously transformative processes and ideas that would bring about new, efficient and effective ways for the government to serve its citizens. Speakers during the second panel dedicated to benefits from OGP and importance to involve all stakeholders in the process included: MARTIN TODEVSKI from the Center for Change Management, Co-Chair of the Council for OGP Coordination and Monitoring; IVONA STALEVSKA from the Foundation Open Society – Macedonia, Coordinator of CSO Network for OGP; ZHARKO HADJI-ZAFIROV from the Center for Legal Research and Analysis; and DANIELA ARSENOVA-LAZAROVA, Local Economic Development Coordinator at the Municipality of Sveti Nikole. The panel session was moderated by DARKO ANTIKJ from the Association for Emancipation, Solidarity and Equality of Women – ESE.

Martin Todevski elaborated that the OGP Council as the governing body for this process, comprised of 14 members from institutions and the civil society, is a unique model for shared governance. OGP Council holds great importance because it brings all stakeholders in one place, with institutions and civil society organizations being involved in decision-making on equal footing.

Ivona Stalevska from FOSM underlined the characteristics of the CSO Network for Open Government Partnership, formed in the light of activities for drafting the new (fifth) OGP National Action Plan, for the purpose of more organized action and impact by civil society organizations on development of this plan, as well as for the purpose of encouraging monitoring efforts in terms of implementation of current and future action plans. CSO Network for Open Government Partnership is a representative body and includes 69 CSOs that work with different constituency groups, while its role is to mobilize and coordinate advocacy efforts of the civil society in respect to OGP-related issues. The Network will contribute to creation of relevant structure for consultation and coordination across the civil society, but also between the government, civil society organizations, citizens and other stakeholders in development, implementation, support, promotion and monitoring of OGP priorities and initiatives. Zlatko Atanasov said that at the Parliament, as a stakeholder involved in the OGP process, work on the concept of open government throughout the years has led to recognition of this process and its definition as priority. For the Parliament, OGP is not merely a concept of open cooperation with civil society organizations and openness towards citizens, but it has enabled the Parliament’s independence to be raised at the level of strategic commitment in terms of administrative, functional, security and financial independence of this institution. At the same time, OGP allowed the Parliament to re-examine the culture of openness and to establish mechanisms that give citizens open access to the legislative house, such as the general proactive approach of the Parliament, civil participation in the legislative process, but also proactive publication and revision of documents produced by the Parliament and diversification of channels for dissemination of information to citizens.

Zharko Hadji-Zafirov informed conference participants that the Center for Legal Research and Analysis, together with the Supreme Court and other high-instance courts in North Macedonia, has initiated discussions around open judiciary. In our country, the judiciary does not distinguish between openness and transparency. Hence, the next period will pose a challenge for explaining this difference and for the judiciary to accept what open judiciary truly means, having in mind that judges and court officers believe that performing their duties transparently means that the judiciary is open. Based on previous cooperation with high-instance courts, the Center has secured unanimous consent for participation in the process and drafted the Action Plan for Open Judiciary as a joint effort, which was later shared with OGP London and OGP National Coordinator. The idea behind the open judiciary process is to create a body comprised of representatives from high-instance courts, basic courts, and representatives from the civil society and the broader expert public, tasked to develop the Open Judiciary Strategy.

Daniela Arsenova-Lazarova said that the local government view OGP Local as the basis for a long-term model of cooperation with precisely defined action plan for future development. OGP Local is of special importance because it implies direct participation of citizens and civil society organizations and, thus far, the process has encouraged several initiatives raised by citizens that are implemented to date and have potential for growth. In the future, OGP Local will be geared towards increased fiscal transparency of local governments, improved delivery of municipal services in the areas of urban planning, public utilities, education, health, local economic development, etc., as well as proactive publication of public information.

Darko Antikj summarized that panel discussions generally point to the fact that OGP offers a defined and organized approach; an opportunity for cooperation between institutions, the civil society and citizens; an opportunity for joint participation and joint decision-making, enabling CSOs to proactively engage in these processes and allowing institutions to utilize knowledge and expertise accumulated by the civil society in different segments. Networking of CSOs for the purpose of the OGP process facilitates mobilized, harmonized and coordinated action in different areas and with different experiences, giving CSOs strong voice in the entire process. Next steps in development of the OGP National Action Plan 2021-2023 and priority areas that should be included therein were discussed during the third panel and included key notes delivered by GERMAN FILKOV from the Center for Civil Communication, Member of the Council for OGP Coordination and Monitoring; SANDRA PERNAR, OGP Regional Lead for Europe, and MARIJA NIKOLOVSKA ARSOVSKA from the Foundation Metamorphosis and OGP Online Platform. This panel session was moderated by Maja Petkovska Leses from the General Secretariat at the Government of RNM.

German Filkov presented the four priority areas for co-creation of the new action plan defined as part of broad consultations, i.e. 1) transparency, accountability, proactivity and inclusion; 2) anticorruption and promotion of good governance; 3) public service delivery; and 4) access to justice. These priorities cover commitments and measures that will promote greater involvement of citizens in policy-making processes, as well as prevention of corruption, but will also facilitate delivery of quality public services and effective access to justice and quality legal services, with special focus on youth, marginalized groups and women.

Sandra Pernar indicated that she sees great potential in North Macedonia’s cooperation with the OGP initiative, and appreciates benefits created thus far. Moreover, she summarized possibilities for support which OGP could offer in the process for development of the new action plan and welcomed the commitment for a compact and clearly defined plan that will yield results by the end of its timeframe, having in mind all specificities and challenges we are facing both at local and global level.

Marija Nikolovska Arsovska shared that, in the last period, the Foundation Metamorphosis worked on designing the OGP Platform, which is more than online platform for organization of consultations, but a platform that will support each aspect of the process. It will cover consultations for development of the new action plan, feature an interface to monitor implementation of the action plan, showcase previous action plans and will support and present activities of OGP Network and OGP Council. Although initial plans for the platform implied simplified solutions, its final design features the previously indicated elements in the form of more complex software applications in order to cover inputs from all stakeholders obtained as part of broad consultations conducted over a longer period of time.

The process for creation of the new action plan will be much more dynamic, concluded Gapikj Dimitrovska by the end of the conference, mainly due to detailed documents that have been drafted, the guidelines provided by OGP Council, such as: timeline, assessment criteria and education materials that will be used.