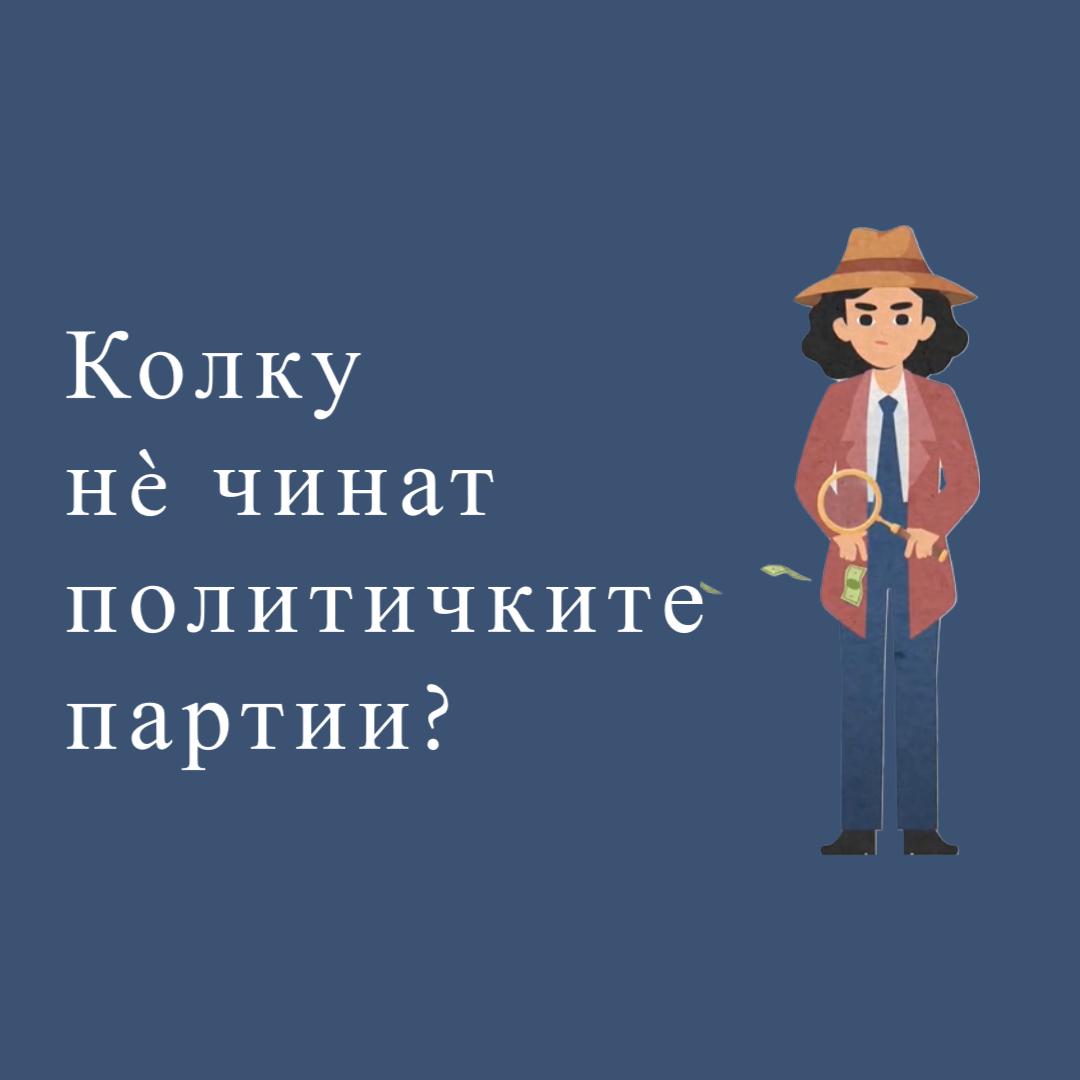 How much do political parties cost us?

The purpose of this public policy document is to present the system for financing political parties in the Republic of North Macedonia in the period from 2011 to 2021 and to give recommendations for its improvement. The analysis is based on information obtained from several different sources: a database available through the Open Finance web platform containing the payments of the Ministry of Justice to political parties under account 463170 (transfers to political parties), available at: https://open.finance.gov.mk/mk/home; a database created on the basis of data contained in the decisions for the allocation of funds for financing of political parties adopted by the Ministry of Justice, which was obtained through access to public information; and, finally, a questionnaire for the media and civil society organizations, through which the views and experiences of the respondents regarding the financing system of political parties are learned. The electronic questionnaire was started by 37 respondents, and was fully answered by 25 respondents – media and civil society organizations, i.e. 28% of the targeted, convenient sample, in the period from 8 to 20 October 2021.

The following are the key findings.

However, the actual payments that are visible on the Open Finance portal through account 463170 are different from the decisions of the Ministry of Justice because, in addition to the annual funding, they include payments based on the funding of party research and analysis centers, i.e. do not include suspended payments to parties that have not fulfilled their reporting obligations. Thus, in essence, the lowest amount paid annually on the basis of account 463170 is 51,675,368 denars in 2014, i.e. the highest amount paid is 315,334,064 denars in 2019. The total amount paid in the period between 2011-2021 is 1,630,182,465 denars (or about 26,507,032 Euros).

Electoral success greatly affects the funding that political parties receive under the annual funding system. However, the way the system is set up completely excludes independent lists and successful candidates. This set-up of the system creates unequal and unfair conditions for political competition between political parties and non-partisan actors. It is necessary to revise the bylaws that regulate the system of financing of political parties.

The measure of suspension of the state financing due to non-fulfillment of the reporting obligations provided in the LFPP gives relatively positive results. In the past four years, after the Ministry of Justice issued a decision for suspension, in about 38% of the situations, the parties acted on the decision and fulfilled the legal obligations, after which the payment was made.

For the four parties with the most seats won, an additional approximately 320,000 Euros are allocated annually for their party research-analytical centers and capacity building of their employees. Parties that have been paid on this basis so far are VMRO-DPMNE, SDSM, DUI, Besa and the Alliance for Albanians.

According to the findings, the assumption that increasing state funding will reduce private funding, and thus the risk of external influences and pressures, is incorrect. Donations in the analyzed period show a significant decline between 2015 and 2016 (from 13,770,351 denars to 3,529,280 denars), after which during the next three years the amount is stable at about 6-7 million denars, before almost doubling in 2020 (at 12,705,078 denars). There is a decrease in the collected membership fee. In the analyzed period, the highest membership fee was collected in 2016 (28,455,976 denars), and the lowest in 2020 (15,279,260 denars). According to the data, we can conclude that donations do not decrease, but with the increased percentage of state funding, only significantly increases the total amount available to parties during the year, which is a cumulative amount of annual funding, donations and membership fees.

Finally, CSOs and the media have been critical of the way the political party funding system is set up. 77% of respondents think that the system is unfair and does not offer equal opportunities for political competition, because it favors large and parliamentary parties, at the expense of small and non-parliamentary parties. Additionally, the respondents largely agree that: the media space in the election campaign is unfairly divided between the competing parties; the legal framework for the oversight of political parties is underdeveloped and leaves room for abuse and corruption; the solution that enables financing of the party research-analytical centers of only the four largest parties is discriminatory; the percentage allocated for annual funding is high.

Hence, it is necessary to revise the Guidelines for allocation of funds from the Budget of North Macedonia for the annual financing of political parties, to strengthen the system for monitoring and controlling the spending of party finances by the competent institutions and to create conditions for equal political competition to all party and non-party political actors.

The public policy document is available in Macedonian and Albanian.

This policy paper was prepared by the Foundation Open Society – Macedonia (FOSM) for the International Republican Institute (IRI) under the program “Promoting Financial Transparency of Political Parties in the Republic of North Macedonia” with financial support from the National Endowment for Democracy in the United States. United States of America (USA).

FOSM is responsible for the content and in no way reflects the positions of the International Republican Institute (IRI) and the National Endowment for Democracy.