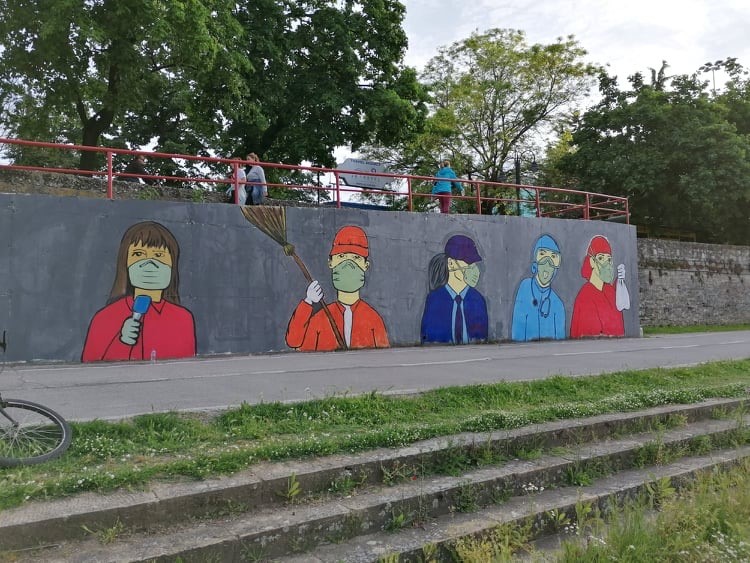 At the initiative of a group of artists – Gjorgje Jovanovic, Ljubiša Kamenjarov, Aleksandar Naumovski, Ivan Ivanovski and Andrej Mitevski, the Center for Contemporary Arts conducted 5 art actions in the city of Skopje – 5 coronavirus- themed murals were drawn.

Topics such as social equality and justice in a time of pandemic and the importance of respecting the recommendations of the authorities are permeated through the five murals. But this art-action in an artistic way also tries to express public gratitude to the medical staff, journalists, reporters and cameramen, the police, and the workers who work on daily supply and logistics and who in these difficult times are first on the line defending citizens’ lives.

Going in circles to break the circle

(Location: in front of the polyclinic in Bit Pazar)

The idea of this drawing is to emphasize the cyclicality of the processes and the possibility to influence that cyclicality. Through the iconic representation of a dog chasing its own tail, the author emphasizes the importance of awareness in each of us individually for the protection of personal and collective health. (Location: the facade of the Mobile Gallery)

Dr Ninja is a work of art that represents the people who fight the epidemic, whether they are medical workers, communal workers, and police officers portrays as superheroes and modern ninjas. They use their powers to deal with the epidemic and its destruction so that life can return to normal, and thus their lives can return to normal. The idea is actually to show that each of us can help these superheroes in a simple way – by taking care of ourselves and others in these difficult times. Gratitude to the health workers, journalists, communal workers, police officers and suppliers is the title of Aleksandar Naumovski’s work. The topic of this work is the people that in the period of the epidemic accept the blows of the decease, fighting for all of us and enabling the functioning of the vital segments of society. Through 5 large portraits (communal worker, saleswoman, nurse, reporter and policewoman) the author on our behalf expresses gratitude to all those who heroically sacrifice themselves in these difficult times. Corona in a jar

Corona in a jar is the work of Jovanovic, in which he visually represents the efforts of humanity to isolate the virus and bring it under control. Jovanovic’s work covers the broad social context of the current situation, presenting, on the one hand, the efforts and needs of humanity to preserve reason and the need to bring the situation under control. At the same time, the drawing itself sends messages of social justice and solidarity among people as the only way to overcome such difficult situations. The corona attack planet Earth is the inspiration for this work, which will be artistically presented in the form of coronaviruses that mercilessly bomb the Earth. But fortunately, people do not stay idle and are more active, everyone within their profession (scientists, doctors, military, police) and specific knowledge get involved in the fight against corona, in order to get rid of it as soon as possible from the enemy, which is still not well known to us.