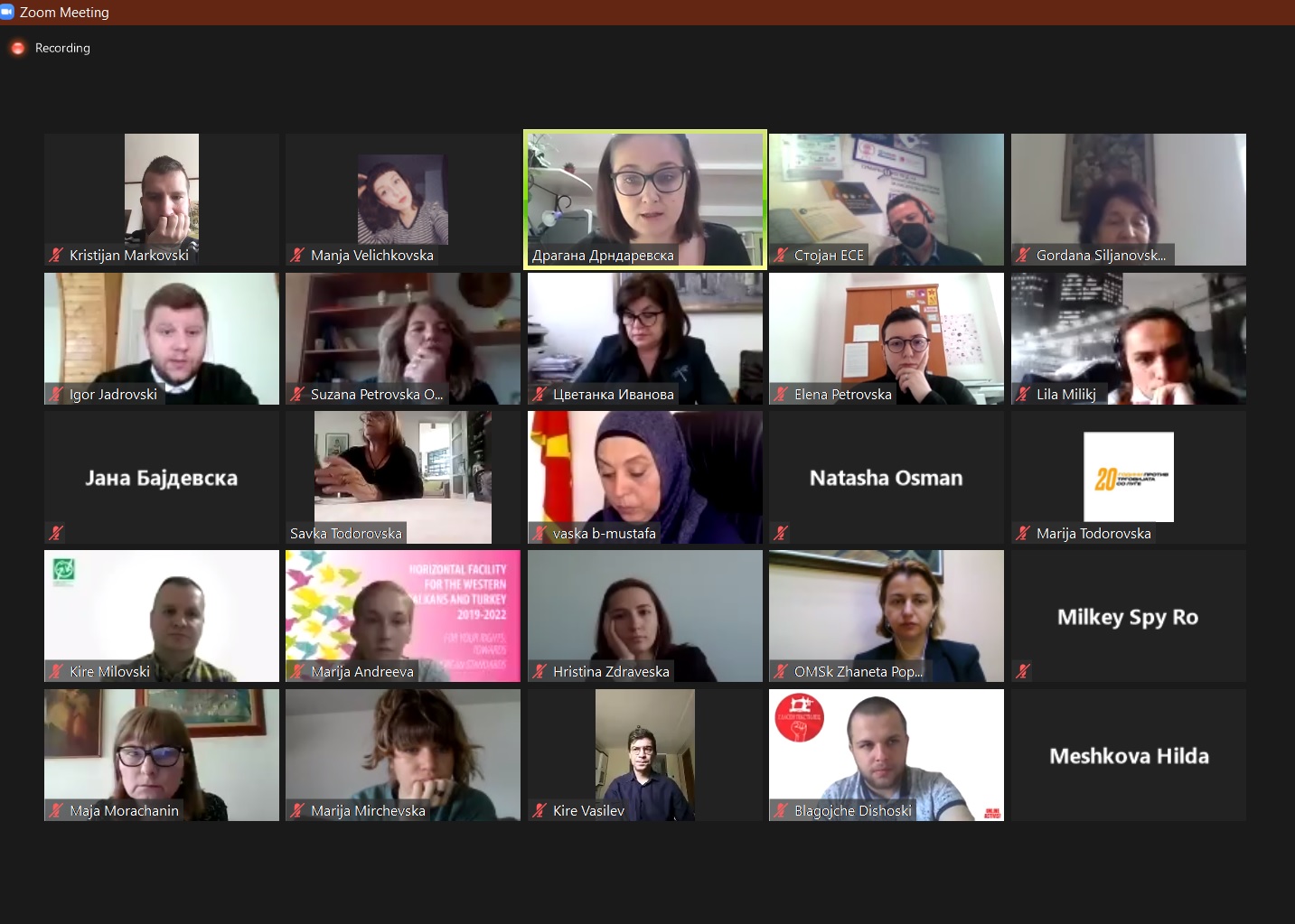 The Network for Protection against Discrimination and the Commission for Prevention and Protection against Discrimination organized the first joint public event to present the conditions and challenges faced by the Commission and to strengthen its role in the promotion and protection of human rights in our country. The video of the whole event is available here, and below we present some of the statements of the introductory speakers and panelists from both sessions.

The online conference was attended by representatives of the civil society sector, who have long advocated for the promotion of prevention and protection against discrimination by changing the legal framework and establishing a new Commission for Prevention and Protection against Discrimination. The participants, representatives of the legislative, executive and judicial branches, expressed support for the work of the Commission as well as the will to improve the capacities of the competent institutions, improve the legal framework and support the Commission in overcoming the challenges it faces. 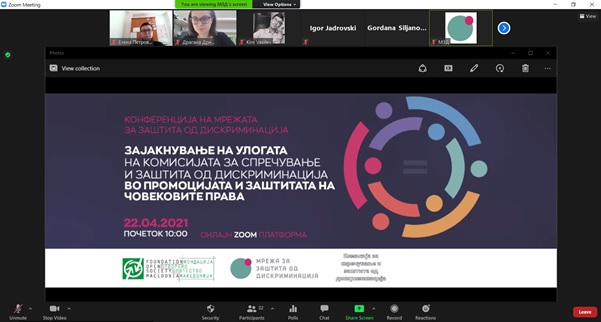 In her introductory speech, Dragana Drndarevska from the Network for Protection against Discrimination and the Coalition MARGINS opened the conference and said: “Together we have a new opportunity to start from the beginning, to learn from previous experiences and to build an institution that citizens will trust. As a new institution, the CPD faces and will face a number of challenges. It is crucial that the Commission has the political support to achieve its goals, that the authorities respect and implement its opinions and recommendations. An independent equality body is a body whose work will often not always be to the liking of the authorities and political parties, a body that will enforce the law, criticized the work of institutions and contribute to its promotion. Authorities will have to abide by the Commission’s recommendations, even when they are not in line with their political goals and agendas. In this way, they must relinquish some of their power in the name of respect for human rights, the rule of law and building a more equal and democratic society.”

In the introductory panel, Kire Milovski from the Foundation Open Society – Macedonia said: “The network of civil society organizations for protection against discrimination through its project activities, supported by the Foundation, continuously makes efforts to affirm the work of the Commission for Prevention and Protection from discrimination; develops domestic practice by providing free legal aid to citizens in cases of discrimination; alerts the public and policymakers about the violations; advocates for the promotion of protection mechanisms against all forms of discrimination. We are careful to provide support and legal assistance to citizens who are marginalized and powerless to deal with discrimination on their own.” 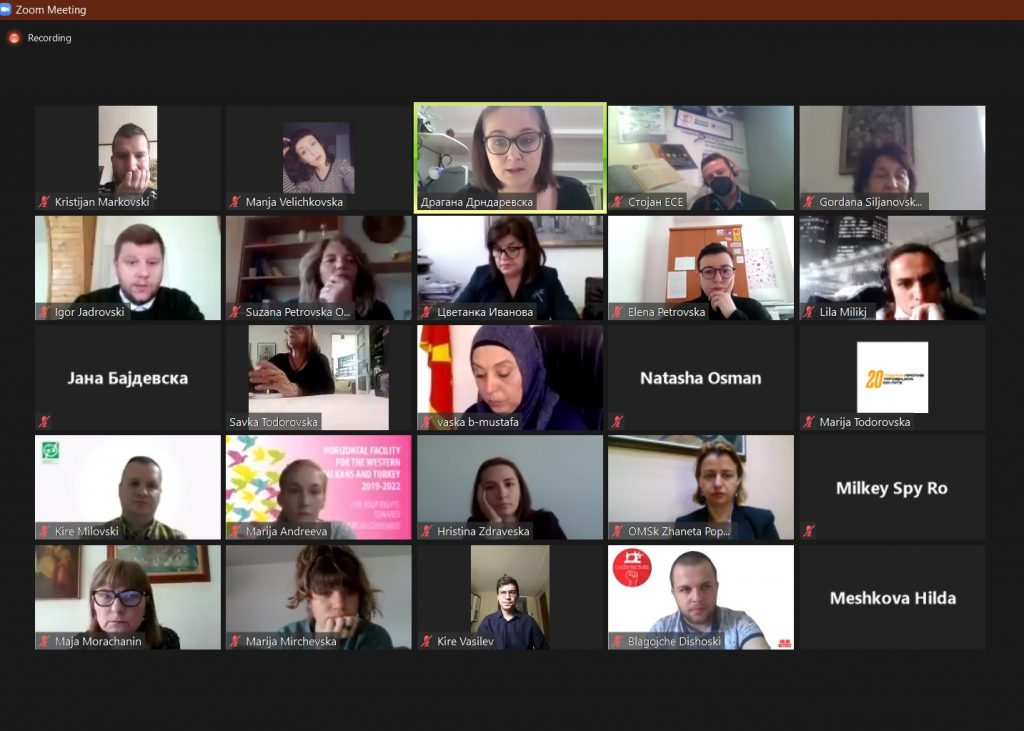 The President of the Commission for Prevention and Protection against Discrimination, Vesna Bendevska, on the other hand, stressed that they face the challenge of building a new institution and that they are aware of the high expectations from the new Commission. She said that they are preparing bylaws, protocols for cooperation with key partners, announced the establishment of an analytical department within the Commission, drafting a Rulebook for decision-making and signing a Memorandum of Cooperation with the Network for Protection against Discrimination and other key actors in the area. “The CPD will initiate cooperation at all levels, i.e. with all committees of the Assembly, such as the Committee on Equal Opportunities for Men and Women, the Standing Inquiry Committee for Protection of Civil Liberties and Rights, with civil society organizations, international partners working in the field of human rights, etc.”

Speaking about the preconditions for the functionality of the CPD, commissioner Kire Vasilev pointed out that due to legal obstacles and shortcomings, the CPD has been facing technical and administrative challenges for a long time, which the members of the Commission expect to be resolved in the coming period, together with parliamentary services. The employment in the professional service, the realization of the public procurements, the equipping of the premises for work as well as the creation of the website is the next step, which should be realized in the shortest possible time. He said: “The work of resolving discrimination is a huge challenge, but with the agility and determined work of the members of the Commission, there will be progress. The Commission is already working on establishing multilateral cooperation with domestic institutions, civil society organizations, foreign organizations, etc., in order to jointly intensify efforts to resolve the problems facing the Commission as soon as possible.”

The Secretary-General of the Assembly of North Macedonia, Cvetanka Ivanova, spoke about the role of the Assembly in supporting the work of the CPD, referring to the small budget available to the CPDP: “The commission must receive a larger budget for its work and commissioners should actively participate in future budget planning. Due to technical problems, the Commission must not be allowed to waste time and not work efficiently for the benefit of the citizens.” Ivanova called for substantial co-operation with the Assembly, parliamentary working bodies and informal inter-parliamentary groups working to promote the rights of various marginalized groups, such as Roma, LGBTI, people with disabilities. “Diversity is a potential for development, not a basis for discrimination,” she said.

MP Gordana Siljanovska-Davkova, chairwoman of the Commission for Equal Opportunities in her address on the key challenges to which the CPD should overcome, expressed her satisfaction with the active work of the Commission which is already publicly giving its opinions. Siljanovska-Davkova stressed that she expects the Commission to be independent, professional and determined in the fight for equality. She stressed that the Commission must be committed to ensuring respect for physical and moral integrity, especially in the context of LGBTI people, who in the 21st century in our country still cannot express themselves freely and without fear. “The commission should work on its reputation, accountability and be proactive, and not act only on the submitted complaints of the citizens, but also on its own initiative,” said Siljanovska-Davkova.

Stojan Mishev from the Network for Protection against Discrimination and the ESE Association, speaking about the legal mandate of the Commission and the preconditions for transparency, accountability and efficiency, stressed that it is necessary to: “Ensure public broadcasting of CSDP sessions (with respect and protection of privacy and personal data), preparation of strategies and work programs with the involvement of all stakeholders, transparent work through regular information, use of tools for public education, promotion of equality of their work, providing easily accessible forms for reporting discrimination, informing about the funds spent and the degree of activities carried out.”

Commissioner Igor Jadrovski spoke about the needs and ways of cooperation of the CPD with key actors for protection and promotion of equality and human rights and said: “Priority now is the functionality of the Commission, by providing premises for its work, staffing, increasing human technical capacities, employment in the professional service and creation of an electronic database ”; and further announced that it is still necessary to open a new announcement for the appointment of another member of the CPD. He emphasized that it is important to have good cooperation with the Ombudsman, with the courts, with the Parliament, with the civil society organizations, with the inspectorates and the competent ministries. Jadrovski expressed satisfaction with the premises they have provided for the Commission, which are accessible to persons with disabilities, and expressed a commitment to ensure the accessibility of the services and activities of the Commission for Persons with Disabilities.

Regarding the cooperation between the Parliament and the CPD, the MP and coordinator of the LGBTI Inter-Parliamentary Group, Maja Morachanin, stressed that: “The budget is small, but it is necessary to act when a rebalance is planned, which would support increasing the budget of CPD”; and noted that the openness for cooperation with informal groups in the Parliament so far has proven to be a mechanism that brings successful results. She informed that the Assembly is currently working on making the decision to announce a competition for elections and appoint another member, which will equip the Commission.

Judge Hilda Meshkova from the Basic Court Skopje 2, spoke about the judicial protection against discrimination and the cooperation between the judiciary and the CPD and stressed the role of the Commission as extremely important and suggested that it act to increase the education of citizens about discrimination. Meshkova says that it is necessary to provide citizens with connections to free legal aid services from which they could receive adequate legal support and representation in cases of discrimination. “The court is open to further co-operation, and now there are opportunities to act, given that there are a number of laws that explicitly protect against discrimination,” Meshkova said. She also referred to the institute of “passing the burden of proof” as a key and necessary tool for effective protection against discrimination, because in these cases the plaintiff is in a less favorable situation because the evidence is usually in the hands of the defendant.

Speaking about the promotion of the cooperation between the civil society sector with the mechanisms for protection and promotion of human rights, the Executive Director of the Helsinki Committee for Human Rights, Uranija Pirovska emphasized that in our country special attention should be paid to hate speech, which is widespread and which is a direct consequence of the lack of judicial protection. She emphasized that the CPD should act preventively on these phenomena, and it is especially important that the new composition of this Commission is sensitized and has knowledge of dealing with discrimination. “The CPD should act in accordance with its competencies, and not work only on complaints. The civil society sector should be perceived as a partner, but also a corrector and critic of the inappropriate treatment and inaction by the authorities. Ombudsman Plus for external control over the work of the police.” Pirovska also referred to the Ombudsman and demanded greater cooperation from the institution with the civil sector, as well as the final revival of the Ombudsman Plus mechanism for external control over the work of the police.

The Deputy Ombudsman Vaska Bajramovska Mustafa stated that: The Ombudsman opens the cooperation with the new CPD on several levels, in the cooperation with the cases, in the collection of statistical data, improvement of the legal framework, informing the public, reporting to the international human rights bodies etc.” According to her, the new Law on Prevention and Protection against Discrimination gives a new approach to the protection of human rights, but still needs a more serious, more sensitive approach in working with citizens’ complaints and fostering multisectoral relations.

The members of the Commission informed that they will start with the development of the website, while the Facebook page is already available on this link. The participants in the conference also discussed the obligation to implement the Law on Prevention and Protection against Discrimination by each ministry, by strengthening the capacity of the administration, inspectorates and harmonization of legislation on protection and prevention of discrimination. One of the key conclusions is the need for final revival of the Standing Inquiry Commission for Protection of Civil Liberties and Rights as a key mechanism that must actively discuss issues in the field of (non) discrimination, draw conclusions, monitor their implementation and to oversee the observance of human rights by the executive branch of power.