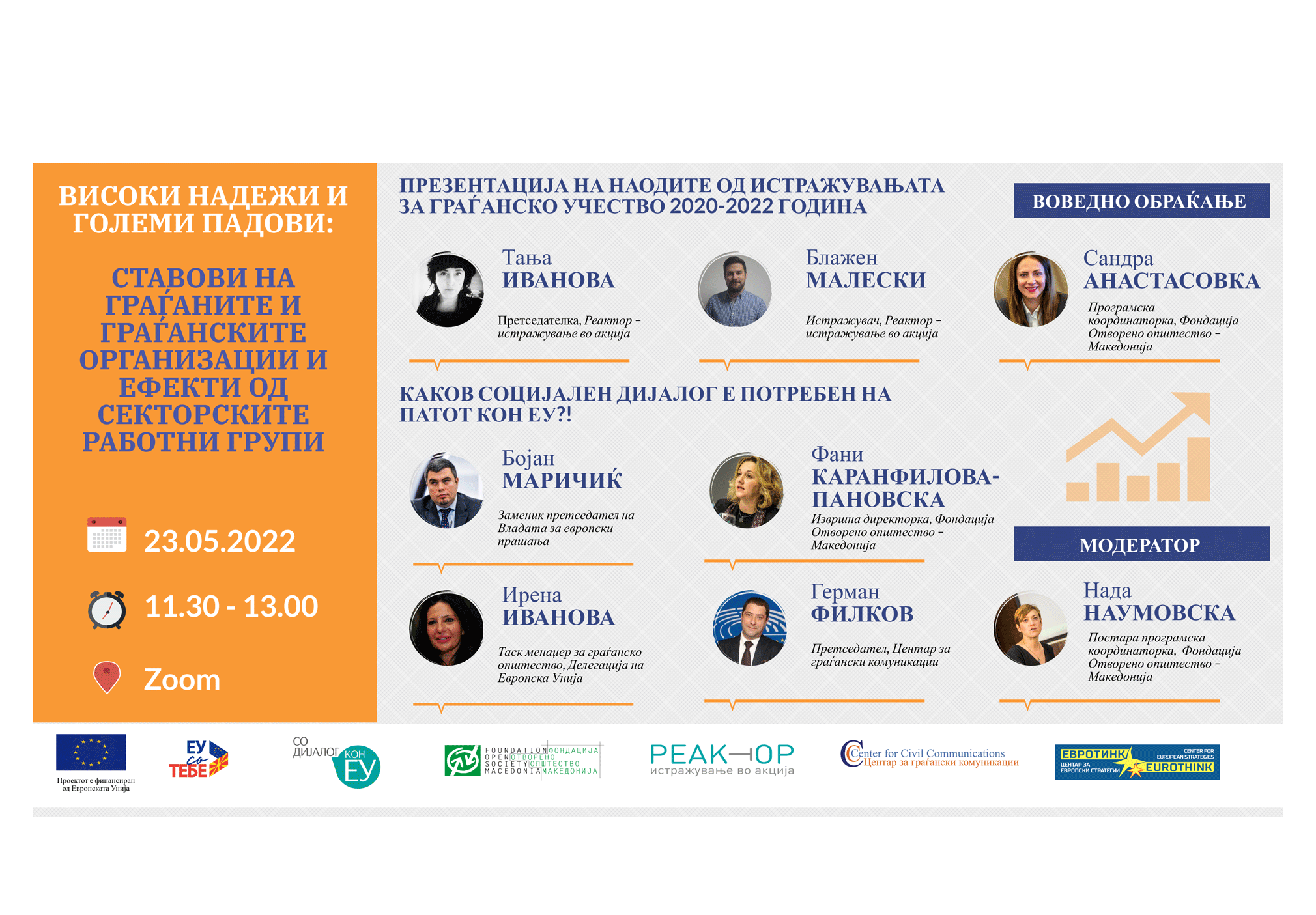 On May 23, 2022 (Monday), starting at 11.30 am, within the project “Dialogue with CSOs – Platform for Structural Participation in EU Integration” the online conference “High hopes and great downfalls: attitudes of citizens and CSOs and effects of sectoral working groups” was held. 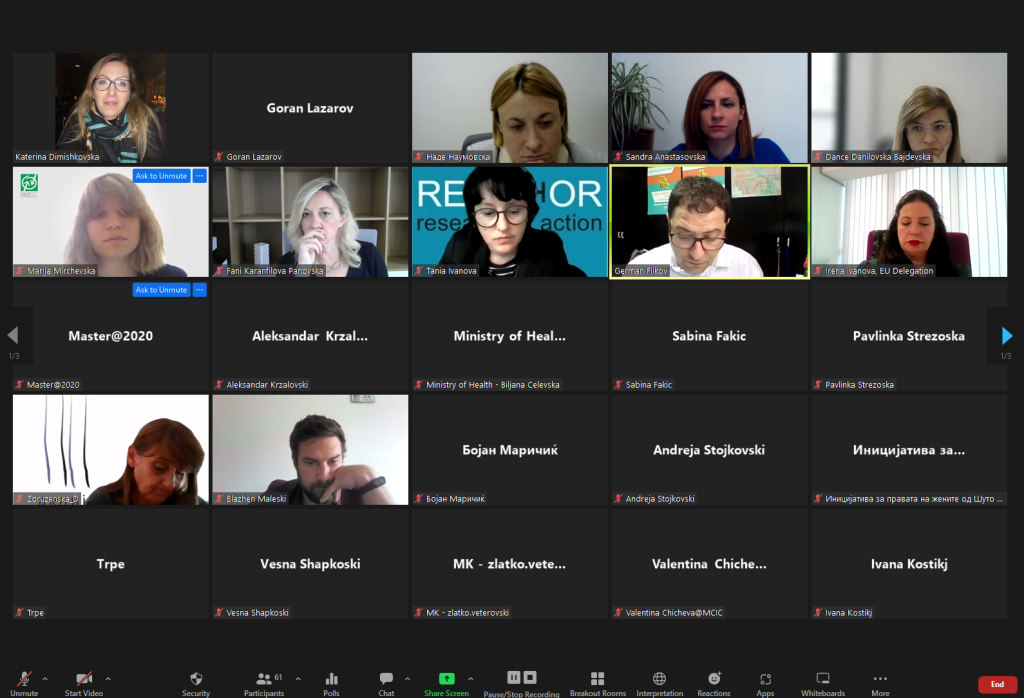 In the first part, Tanja Ivanova and Blažen Maleski from Reactor – Research in Action promoted the data from three cycles of surveys, which were conducted in 2020, 2021 and 2022 in terms of civic participation, citizen support for the EU integration process, as well as the capacities and involvement of civil society organizations in the integration process itself.

Every fifth citizen says that he/she joined a civic initiative before 2020, but we also notice a decrease in participation in the next two surveys (15% in 2021 and 11% in 2022). Citizens without formal education or with primary education participate significantly less in this type of civic participation than those with higher education. The most common topic of the initiatives in which citizens participated: activities for the preservation of the environment. The most common reason why the citizens did not get involved is lack of time/opportunity and lack of interest. There is a small difference in terms of gender – men are more often involved in this type of civic participation – said Ivanova.

Regarding the support of the citizens for the EU integration process, Blažen Maleski emphasized several key data:

Deputy Prime Minister for European Affairs Bojan Maričikj, who stressed the importance of sectoral working groups for the EU accession process, opened the second part of the conference.

The increased intensity and cooperation with civil society organizations have imposed the need to start with the amendments to the Rules of Procedure of the SRG, which is still in the consultation phase but needs to be intensified. – The initiative to move the sectoral working groups to platforms for wider dialogue, going beyond the framework of coordination of donor assistance, confirm the importance of this type of forums for the EU accession process – he said.

Regarding the role of civil society organizations in the accession negotiations, the Deputy Prime Minister for European Affairs pointed out that this government has principled positions that the approach must be inclusive.

We are proponents of the idea that a practical and functional model has to be chosen that will provide enough space for the participation of civil society organizations. Currently, in SEA we are working on the revision of the documents from the negotiating structure from 2019 in order to adapt to the innovations, which are primarily the result of the new methodology for accession negotiations. Of course, we plan to consult the civil society for the whole process and that process is to be completed by the middle of next month at the latest – added Maričikj.

Irena Ivanova from the Delegation of the European Union pointed out that civil society organizations are a bridge between citizens and institutions and donors. Civic activism and the structural response of institutions and donors can improve the environment in which citizens live and overcome EU scepticism. This requires the involvement of civil society organizations, information of citizens and coordination or cooperation with institutions r to properly create the future platform of negotiations with the EU.

The conference was closed by German Filkov, President of the Center for Civic Communications, who pointed out that the shortcomings of the structural dialogue can lead to losing and missing the chance to use the capacities of civil society organizations because in certain areas they are the highest capacities that this country has. This is the reason why they should be put into operation and not left out.

The conference is part of the project “Dialogue with CSOs – Platform for Structural Participation in EU Integration”, coordinated and implemented by the Foundation Open Society – Macedonia, with partners Reactor – Action Research, Eurothink – Center for European Strategies and Center for Civic Communications.