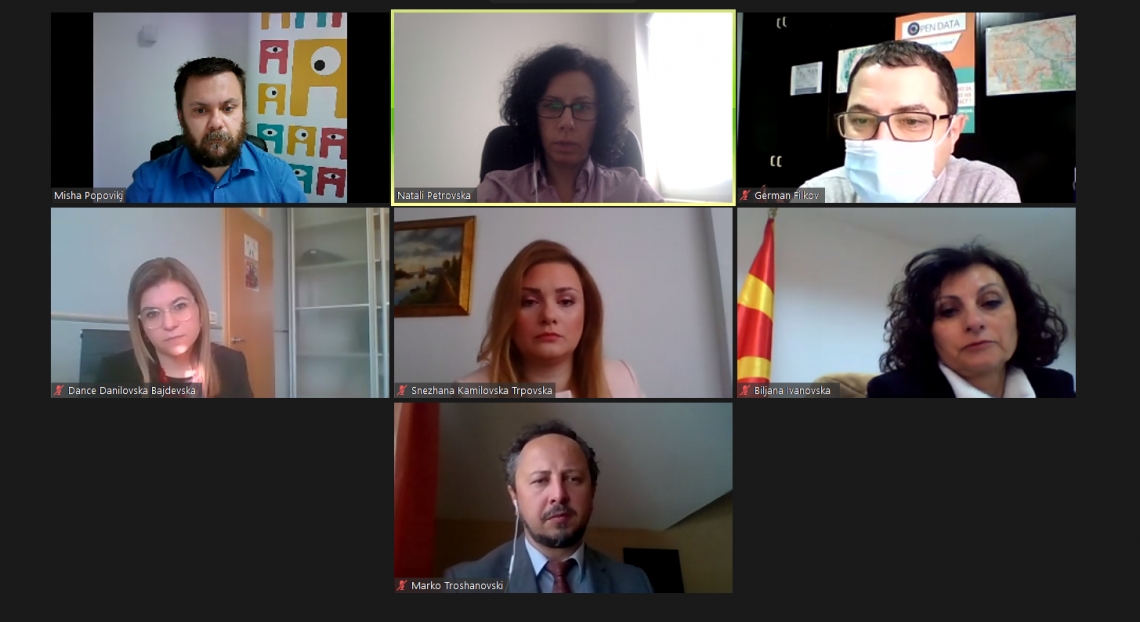 The Platform of Civil Society Organizations for Fight against Corruption today organized the conference “Anti-Corruption Challenges in 2021” within the project “Monitoring the success of the State Commission for Prevention of Corruption (SCPC)” funded by the Foundation Open Society Macedonia (FOSM).

The conference discussed the challenges and activities undertaken in the fight against corruption in 2020 and possible challenges that await us in 2021.

Introductory speeches at the event were held by Dance Danilovska Bajdevska, Program Director at FOSM and the President of the Institute for Democracy, Marko Trošanovski.

Danilovska Bajdevska emphasized that the Foundation Open Society – Macedonia sees anti-corruption through the prism of good governance and rule of law, but also as a factor that affects the access of citizens to and the quality of public services and goods. In the past year alone, we have invested more than $ 1 million through our anti-corruption portfolio in projects by CSOs and anti-corruption activists. At the same time, FOSM has been supporting the Platform of Civil Society Organizations for Fight against Corruption for several years in conducting monitoring of the anti-corruption-related reform processes.

“For us, the work of the Platform is important, especially in the EU accession process, because on the one hand, we show that civil society is active, organized and has the expertise to contribute to the EU integration process. On the other hand, we enable objective and impartial monitoring of the reform processes. The focus of this support is the monitoring of the SCPC, through regular monitoring of their work but also the development of a series of public policy documents for civil society to give their proposals to improve the efficiency of the Commission, strengthen its control function and anti-corruption review of legislation.”- she said. Trošanovski stressed that the fight against corruption is a multifaceted problem that requires political, institutional and financial resources that will be an expression of declarative commitments and will contribute to visible results.

“There are many reform challenges and setbacks when it comes to fighting corruption. The fact is that our citizens still do not have significantly improved confidence in the commitment of institutions in the fight against corruption, at least according to the measurements of public perceptions and anti-corruption indices. Retaining incompetent staff in the fight against institutional corruption, as well as the long-standing inertia of maintaining key institutions without adequate staff and resources, run counter to politically uttered commitments. In addition, the capture of parts of the judiciary effectively nullifies their role in the fight against corruption and, once again, calls into question the sincerity of the declared political support. “Distrust in institutions is a feature of dysfunctional societies and a precondition for their further degradation,” Trošanovski said.

Representatives of the Platform of Civil Society Organizations for Fight against Corruption Natali Petrovska from the Coalition “All for Fair Trials”, German Filkov from the Center for Civil Communications and Miša Popovic from the Institute for Democracy, presented project findings focusing on the judiciary, public procurement and monitoring the Anti-Corruption Commission.

Filkov referred to the failures of the anti-corruption policy in public procurement, citing several cases in which competent institutions do not act. Petrovska pointed out the shortcomings in the resources available to the judiciary as well as the need to check the integrity of public prosecutors and judges.

The President of the Anti-Corruption Commission, Biljana Ivanovska, also addressed the event, saying that in 2021 she expects the working conditions of the Commission to be improved for its more efficient functioning.

She pointed out the risks of corruption in the public procurement process, the impact of the policy, the hiding of the final owners of the companies participating in the tenders, the lack of a base of reference prices, the participation of one bidder with a price without competition, several bidders agreeing on a price, surveys after received tenders, annulment of tenders as well as weaknesses in the tender documentation.

“Regarding the judiciary, the SCPC is checking the property situation, but we are facing problems because questionnaires are not submitted, or are submitted not updated, inaccurate data are given for which misdemeanor charges have been filed. I believe that political will is most important in securing funds for the judiciary and in connecting them,” Ivanovska added.

Deputy Prime Minister for Fight against Corruption and Crime, Sustainable Development and Human Resources, Ljupco Nikolovski had a video address in which he said that the commitment and determination of the Government to end corruption is clear and expressed readiness to cooperate with all stakeholders in charge or those who can assist in the process.

“One of my essential commitments as Deputy Prime Minister is to facilitate communication and coordination between all stakeholders in the anti-corruption sector, with which we should create measures for better functioning and better environment to deliver the results that citizens expect. Citizens expect a firm, determined and resolute fight against corruption and it can only be achieved with an honest, sincere and responsible approach. We are setting up pillars through strong mechanisms, through open and regular inter-institutional communication and cooperation with open and accountable institutions that show resistance to corruption,” Nikolovski said.

You can watch the whole conference in the following video: