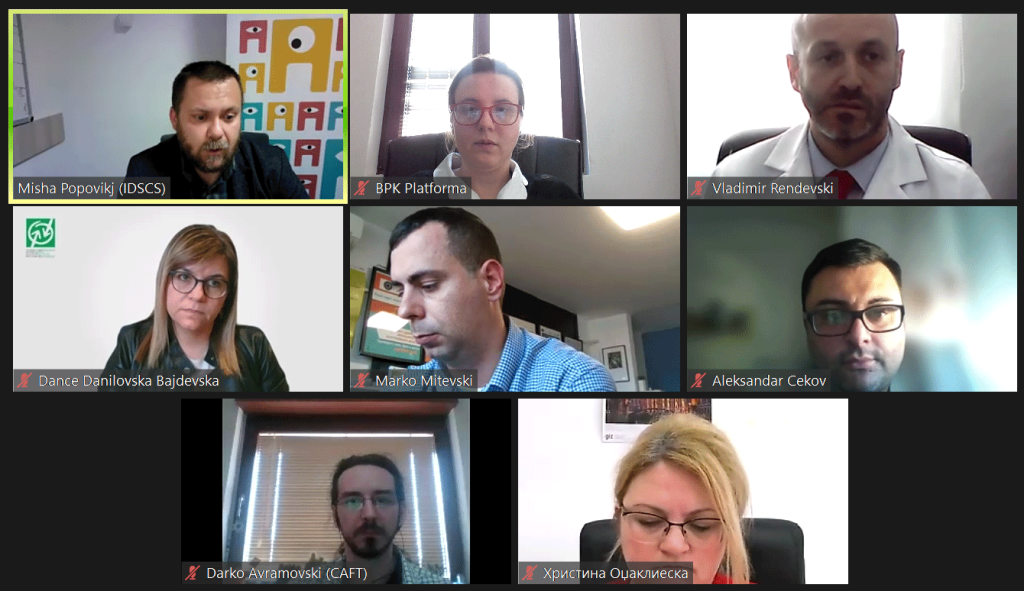 Introductory speeches at the event were given by Dance Danilovska-Bajdevska, Program Director at the Foundation – Open Society Macedonia and Misha Popovikj from the CSO Platform for Fight against Corruption.

Danilovska-Bajdevska emphasized that FOSM has been supporting the CSO Platform for Fight against Corruption for several years in implementing anti-corruption activities.

“We see anti-corruption through the prism of good governance and the rule of law, but above all as a factor that affects citizens in access to quality services and public goods. The Foundation has continuously supported the CSO Platform for Fight against Corruption and the Blueprint Group for Judicial Reform for several years. With our support, civil society organizations continue to be active actors in monitoring the reform processes related to anti-corruption and judicial reform, which also affect the fight against corruption,” she said.

Popovikj stressed that the fight against corruption is a multifaceted problem that requires political, institutional and financial resources that will be an expression of declarative commitments and will contribute to visible results.

“At this conference, we will establish a dialogue between the CSOs of the Platform, the institutions in charge of the areas we have researched and the CSOs working in the areas of environment and health. This event is an important forum that is needed for a long-term thinking of reforms in these areas, which will provide not only development in terms of sector, but also development in terms of integrity, policies and practices in the areas, documents implemented and institutions that work in the areas,” Popovikj said.

The Deputy Minister of Environment and Physical Planning, Hristina Odzaklievska, welcomed the activities and stressed that an effective fight against corruption in the fields of environment and health requires a detailed review of vulnerable activities that leave room for corrupt practices.

“Analyzes of this type and transparent discussions are a good tool that allows us as policy makers to create good legislation that will also act preventively against corruption. We are aware that corruption has real political, economic and social repercussions everywhere. It is an obstacle to democracy and the rule of law, disrupts the distribution of resources, reduces productivity and investment and certainly slows down economic growth, “Odzaklievska added.

Representatives of the Platform of Civil Society Organizations for Fighting against Corruption Aleksandar Cekov from the Center for Research and Policy Making and Darko Avramovski from the Coalition All for Fair Trials, presented findings from the project focusing on the environment.

“Out of a maximum score of 10, the prevalence of corruption received an average score of 9.27, which indicates the need for a more systematic approach in the fight against corruption, because obviously, the current approach, which is based on ad hoc reforms in certain areas, does not give the desired result. Regarding the most burning topics / problems in this area, from the offered, as the most acute problem with an average grade of 9.21, the citizens singled out the problem with the so-called ” construction or urban mafia,” said Cekov.

Avramovski, who presented the “Anti-Corruption Review of the Law on Environment”, emphasized where the key risks of corruption within the law are:

The second panel on risks of corruption in the field of health, the Deputy Minister of Health, Vladimir Rendevski who was previously involved in the fight against the pandemic as director of the neurology clinic, held a short speech.

“We had problem providing personal protective equipment (hats, masks, gloves) because the pandemic started in China with Wuhan. Many of those purchases of protective equipment came from China, and there was a major slowdown in the delivery of personal protective equipment. Not only did they slow down over time, prices even in retail began to rise and fluctuate a lot and unfortunately went to an unevenly high level. They were even several times more expensive than before the pandemic. Furthermore, as the peak eased a bit, the prices did not return to normal, but those high prices that we had at the beginning, started to decrease. A product depends a lot on how it would be procured and in what quantities. Would it be procured by the Ministry for a population of 2 million or should each institution procure it with individual budgets. In terms of that, there would certainly be a difference in achieving the prices, some of those procurements came from the institutions themselves, some we received centrally from the Ministry of Health. Personally, as my idea, I think that lower prices would be achieved if the state takes a role to procure them on behalf of all institutions, and then to distribute them evenly,” said Rendevski.

Marko Mitevski from the Center for Civil Communications, which is part of the Platform, as the author of “Analysis of the equality of delivered health services in different Covid-19 centers” presented some of the findings at the event.

“On average, one patient out of every six hospitalized, dies in the Covid-19 Centers. Additionally, 94.8% of the procurement of drugs was conducted using open procedures, while the remaining 5.2% through the negotiated procedure without prior announcement. However, transparency is not adequately reflected in the competition and prices, “Mitevski presented.

You can watch the entire conference on the following link.