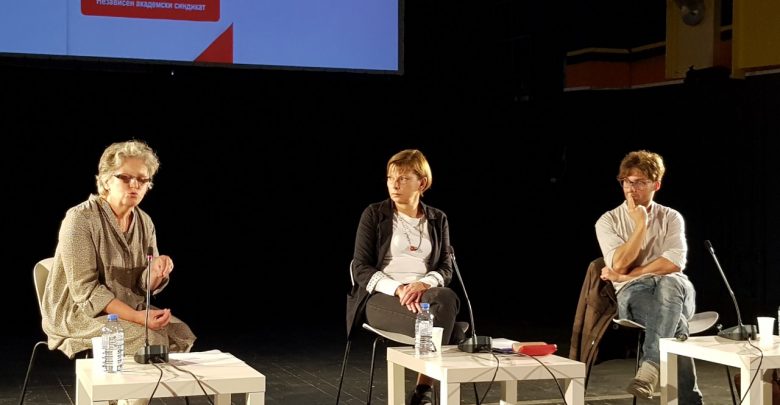 The Independent Academic Union (IAU) on 27 September 2019 (Friday) at the Cultural Center “Kino Kultura”, organized a press conference presenting the results of the first phase of the research as part of the project “Financial Transparency and Accountability in Higher Education and Science in RNM”. The project is supported by the Foundation Open Society – Macedonia. At the press conference, the results of their research were presented by prof. Mirjana Najčevska, PhD and assistant. Dr Branimir Jovanovikj. The press conference was led by prof. Maja Stevanovikj, president of IAU.

Prof. Najčevska noted that in practice the MoES budget is formally available in its final form, however, the various stages of budget creation are not formally available. Much of the data can only be obtained through the institute: access to public data. In addition, the format in which the citizens budget is currently being offered in official documents does not provide an understanding of individual items/sections, does not provide precise representations of unambiguous meaning and does not provide an explanation of the amounts in their entirety and in individual segments. According to the professor, the most important thing for a budget to be economical, efficient and effective in its creation is to incorporate the real needs and interests of the budget users. RNM is at the lowest level of participation in the creation of the MoES budget.

Dr Branimir Jovanovikj presented his findings arising from the comparative analysis of the MoES budget structure over the past five years, with particular reference to the budget items for higher education and science and the implementation of the projected budget items.

According to Dr Jovanovikj, the funds allocated from the state budget for education in RNM are among the lowest in Europe. They account for about 3.7% of GDP and only four European countries have lower levels. Over the last eight years, there has been a steady decline in education funds, including funds allocated to higher education, with 1.1% of GDP in 2010 reduced to 0.8% in 2018, again among the lowest in Europe. Funds invested in science in RNM are extremely low and only part of it is directed to support scientific research, and the remainder is intended to fund scientific institutes.