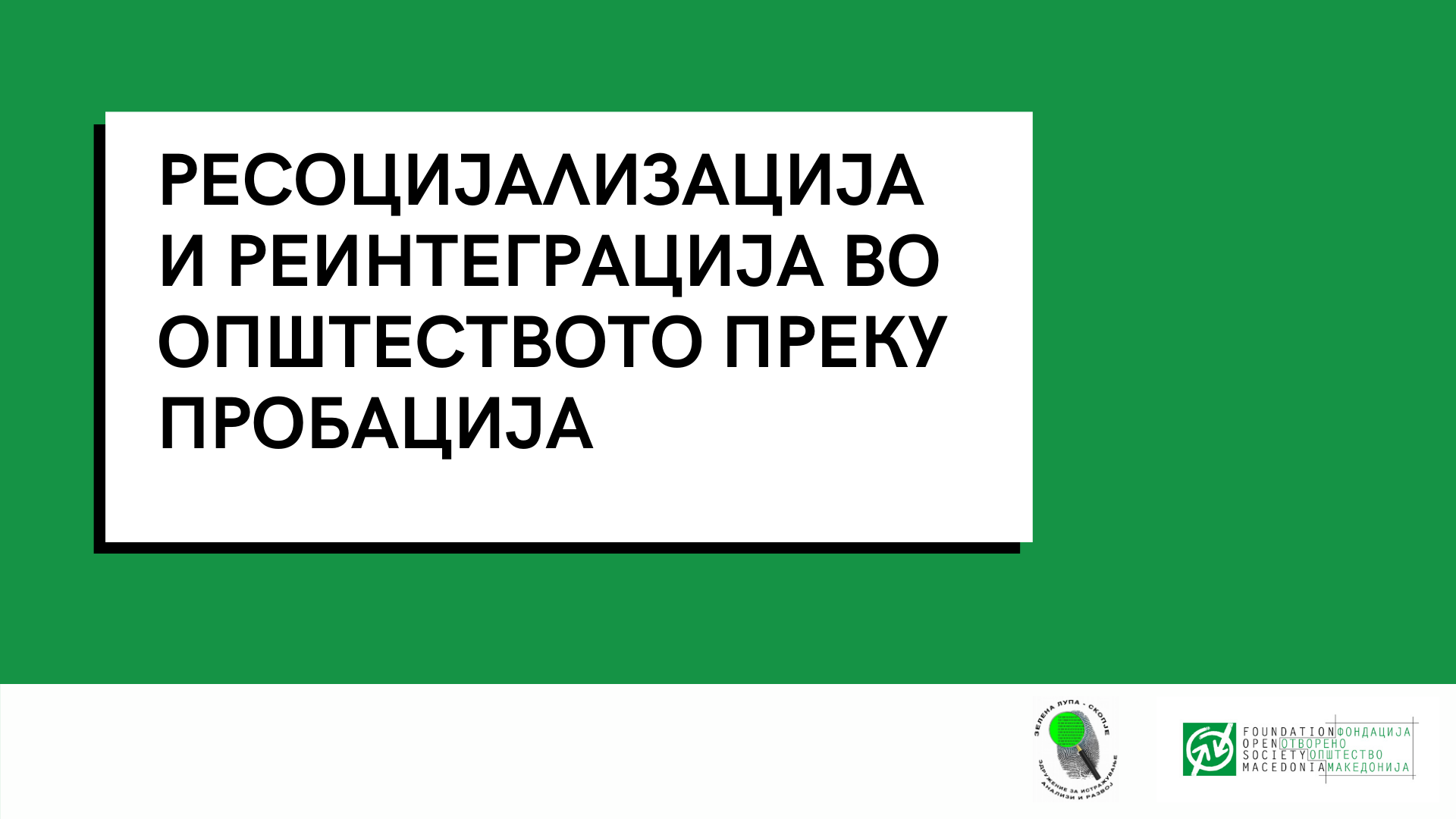 Resocialization and reintegration into society through probation

“Green Magnifying Glass” is a civic association that advocates for the rule of law, the integrity and functionality of institutions, and the fight against corruption. In recent years, the association, through projects and activities, has focused on improving the situation in the judiciary, assisting unjustly convicted persons, exercising their rights under the Law on Amnesty and Resocialization, and enforcing the Probation Law as a European value.

“Resocialization and reintegration into society through probation” is a project implemented by “Green Magnifying Glass”, which aims to contribute to the implementation of the Law on Probation in the Republic of North Macedonia.

According to the experiences of Western countries, probation, in the long run, gives successful results in terms of combating crime, but also reintegration and resocialization of perpetrators in the community. In terms of effective prison sentences, probation alongside alternative measures many times reduces the cost of the state budget, reduces prison overcrowding, and thus improves prison conditions, resulting in fewer lawsuits against the state in the Strasbourg Court of Human Rights. At the same time, the probation as a European value brings us closer to fulfilling the recommendations for joining the EU as well as fulfilling the recommendations from Chapter 23.

According to the Council of Europe, the Republic of North Macedonia is the third country according to the principle of prison overcrowding with 123 prisoners in 100 vacancies. In our country, imprisonment is predominantly practised, as opposed to probation and alternative punishments in order to re-socialize convicts through community service. Imprisonment as an inevitable form of punishment also has a number of negative consequences for social integration, but also for the high degree of recidivism. On an individual level, there is dehumanization, social degradation, criminal infection and other phenomena that negatively affect rehabilitation. The negative consequences are especially evident in short-term prison sentences.

The penal policies of developed countries are aimed at alternative sanctions, through the promotion of probation and other forms of education and supervision, while introducing information technology as a means of surveillance. The development and application of sanctions within the community managed by a distinct specialized probation service are by far the most widespread and most important in many national legal systems.

The main goal of the Law on Probation is to reduce the number of prisoners in prisons through legal mechanisms, i.e. through the use of alternative measures, and not through the use of political mechanisms, given that some prisons in our country face “overcrowding“. The analysis of the surveys also notes the insufficient normative framework for the application of alternative measures. At the same time, given that the probation service is a novelty in the criminal justice system in the Republic of North Macedonia, the level of information on the goals, role and competencies of the probation service is very low.

“Resocialization and reintegration into society through probation” through planned activities, such as research, analysis, promotional materials, etc., will try to provide conditions for improving the situation by implementing the Law on Probation and raise public awareness on this important topic. Specifically, the findings, conclusions and recommendations related to the analysis of the level of information on the probation of convicts in prisons and determining the specific needs for further education in the field of probation, developed within the project can be found HERE.

“Resocialization and reintegration into society through probation” is one of 15 projects of CSOs fully supported by FOSM to implement activities that will contribute to a better understanding of the process of EU accession of the Republic of North Macedonia.