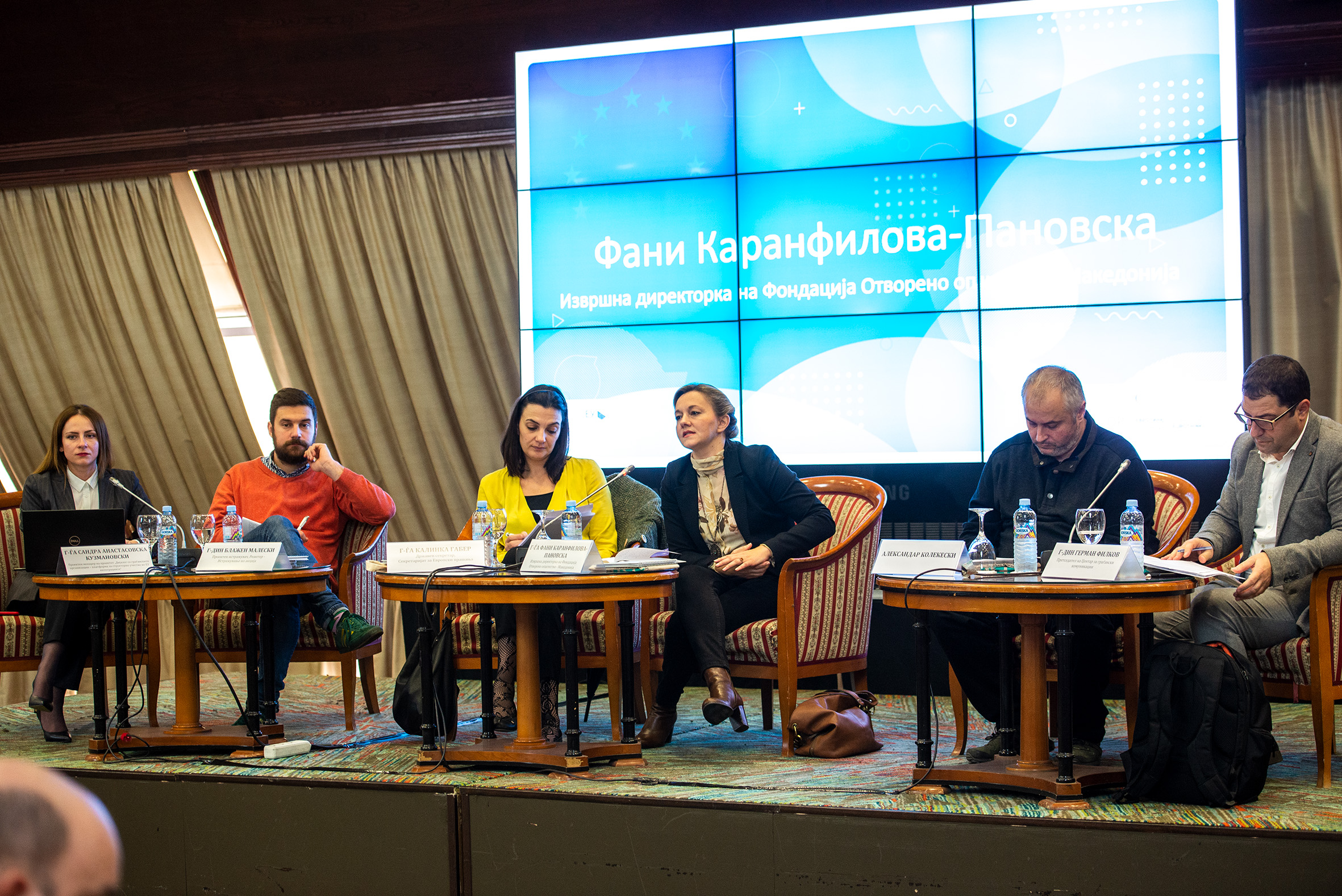 A sectoral consultation on “Improving the Structural Dialogue between Institutions and the Civil Sector in the EU Accession Process” was held on 20 November 2019. The event was attended by more than 130 representatives of CSOs and institutions, emphasizing the need for dialogue between institutions and CSOs in the EU accession process. In addition, recommendations and organized consultations with representatives of the sectoral working groups and civil society were created to improve the way CSOs work and participate in key sector reforms.

The event began with a panel discussion attended by representatives of the project consortium “Dialogue with CSOs – Platform for Structured Participation in EU Integration” and Ms. Kalinka Gaber, Secretary of State of the Secretariat for European Affairs, an institution that is a contributor to this project, but also a key partner in the country’s accession to the EU. FANI KARANFILOVA-PANOVSKA, Executive Director of the Foundation Open Society – Macedonia noted that while in the past period civil society organizations were restricted in access to public policymaking, the need for institutions to open and create a structured practice is inevitable today. With the contribution of CSOs, which base their advocacy on the needs of citizens, the quality of public policies will only improve.

KALINKA GABER, Secretary of State at the Secretariat for European Affairs, explained that the sector working groups are an inter-sectoral forum for conducting a sectoral policy dialogue, setting out priorities for EU financial support and coordinating all external assistance. She emphasized the willingness of institutions to commit to a successful structural dialogue, but also urged CSOs to contribute constructively to public policy-making and to adapt to the tight timeframe in which institutions operate.

GERMAN FILKOV, President of the Center for Civil Communications, pointed out that one of the key commitments of the project “Dialogue with CSOs – Platform for Structured Participation in EU Integration” is evidence-based advocacy. Precisely monitoring reports on the effects and performance of sectoral working groups will provide important guidance on how to best utilize the potential that sectoral working groups have.

BLAŽEN MALESKI, Researcher at Reactor – Research in Action, emphasized that project design activities should help advance gender policy. Unequal participation of women in political processes speaks for unequal impact, and precisely by mapping the participation of citizens and CSOs in local and national decision-making processes will provide better information and draft policies to promote gender equality.

SANDRA ANASTASOVSKA KUZMANOVSKI, the project manager, explained that the official project “Dialogue with CSOs – Platform for Structural Participation in EU Integration” was officially launched with the sectoral consultation. She also presented the citizen participation platform-  www.dijalogkoneu.mk, which is a focal point for consultation between institutions and the civil sector with a focus on the three consultative mechanisms: the sector working groups, the Council for Cooperation with and Development of the Civil Sector and the negotiation teams.

In the second part, the CSOs and representatives of the institutions, divided into 10 sector groups had the opportunity to get acquainted with this consultative mechanism, but also to offer specific recommendations for improving its efficiency and inclusiveness.

This project is funded by the European Union. It is implemented by the Foundation Open Society – Macedonia, in partnership with Eurotink – Center for European Strategies, Center for Civil Communications and Reactor – Research in Action, as well as the Secretariat for European Affairs as a partner.