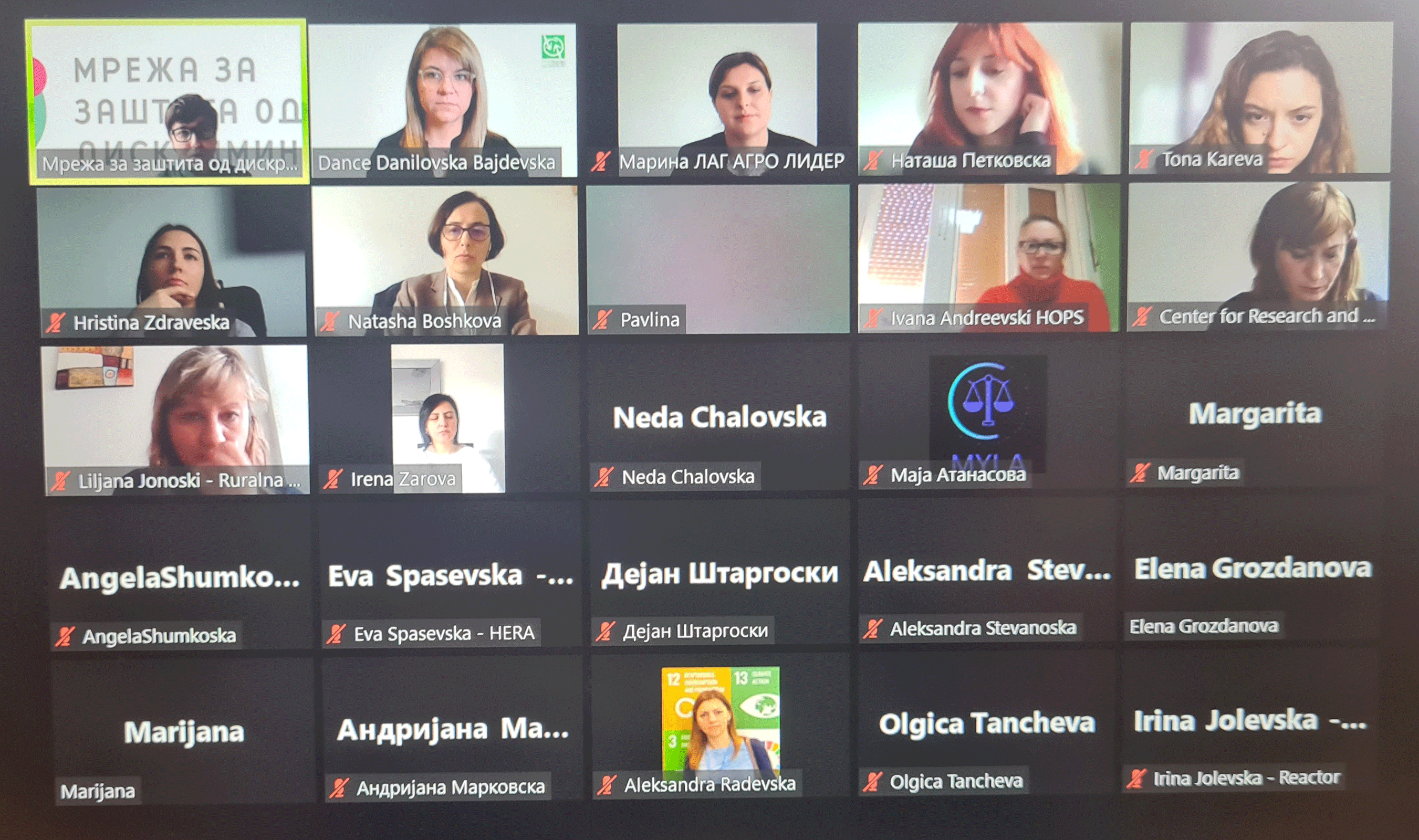 Organized by the Network for Protection against Discrimination, on February 8, a Round Table was held dedicated to the Challenges regarding the harmonization of Directive 2010/41 / EU in the field of social protection and maternity benefits in the Republic of North Macedonia.

The still present traditional patriarchal role of women in the family community contributes to their lower activity in the labor market, limited employment and advancement opportunities, limited social benefits, dependence on a husband or life partner, and often job loss due to motherhood. This position of women in the labor market is further reflected in her position in the various forms and models of employment and the realization of the rights arising from them.

This document was the focus of a roundtable held on 8 February 2022, which was attended by representatives of civil society organizations and relevant ministries and institutions. The event was organized within the project “Network for Protection against Discrimination: Joint Action to Promote Equality and Social Justice in Marginalized Communities” financially supported by the Foundation Open Society – Macedonia.

On behalf of the Foundation Open Society – Macedonia, the Program Director for Rule of Law and Good Governance – Danče Danilovska Bajdevska gave a speech and pointed out that for many years the Foundation has been working on networking organizations on a thematic basis, and with a joint initiative to change the legal framework – women farmers to acquire a paid maternity society, which will correct the injustice to tens of thousands of women of reproductive age, who are registered, farmers. The Program Director of FOSM added that the highest priority of the Foundation is the protection and improvement of the lives of marginalized citizens. In conditions of extremely uncertain and risky situation in which our society and public health were during the pandemic with COVID-19, the need to protect the most vulnerable citizens was huge. In this regard, FOSM provided a donation of 1 million dollars through which, in addition to helping socially disadvantaged citizens, it was possible to improve the capacity of associations and think tanks that contribute to the development of civil society and in times of crisis and their direct impact on the creation of policies.

A clear illustration of the situation in our country was given by Marina Toševska from LAG Agro Leader, who referred to motherhood as a fundamental right of women farmers. Their field research, which has reached up to 400 rural families, has shown that they face a number of challenges and do not reap the benefits of other work sectors. “Due to economic pressures and lack of income security, most women engaged in agriculture can not afford to significantly reduce the workload before and after childbirth, so as a consequence they continue to work in late pregnancy or start working prematurely after childbirth which exposes themselves and their children to significant health risks, such as premature birth, unwanted abortion, etc. “These women face many challenges, and are placed in an extremely difficult financial situation when they are absent due to pregnancy, childbirth or motherhood, which affects their health and the health of their children,” said Tošeska.

Emphasizing that gender discrimination is strongly expressed in labor relations, as evidenced by the fact that the gender gap in the pandemic increased by 22.7%, Natasha Petkovska and Tona Kareva from the Helsinki Committee for Human Rights explained the purpose of the Directive to protect and ” helping wives” by providing their social security on an equal footing with other workers. This Directive, for the first time, grants maternity benefits to self-employed women at the European Union level. At the same time, the Directive allows member states to adopt measures for positive action aimed at ensuring full equality between men and women of working age. Three main shortcomings of domestic law regarding the transposition of Directive 2010/41 / EU were detected: lack of definition and adequate regulation of self-employment; non-recognition of life partnership in social protection; and non-compliance with the standards laid down in the Maternity Allowance Directive.

The targeted recommendations for the Ministry of Labor and Social Policy, the Ministry of Health and the Health Insurance Fund were also presented. In order to comply with the Directive, amendments to the Law on Labor Relations are needed to recognize the self-employed persons in the Law on Labor Relations, as well as the recommendation for establishing and implementing an inclusive legal framework that will ensure the right to maternity leave and the right to cash benefits for absence from work due to pregnancy, childbirth and motherhood and for the health insurance holders of the family agricultural holding. The Ministry of Labor and Social Policy should advocate for an appropriate amendment to the Law on Employment and Insurance in Case of Unemployment, and it is of particular importance to adopt a special law that will regulate civil partnership as a form of partnership and recognize life partners under the same conditions as spouses who have entered into a civil marriage in accordance with the Family Law regarding the acquisition of rights. In order to provide social protection to all affected women, a number of amendments to the Law on Health Insurance are needed.

The representatives of the Ministry of Labor and Social Policy welcomed this initiative and pointed out the next steps in this area where initially a working group will be formalized which will be interdisciplinary and multisectoral and which will adequately address the challenges given the scale of the problem.

Representatives of the Rural Coalition, the National Federation of Farmers and other civil society organizations also took part in the discussion during the event, who together with the representatives of the Ministry of Labor and Social Policy agreed that these issues must be given high priority.