“Waiting for Godot” is an artistic action dedicated to the attitude of the European Union towards the Republic of North Macedonia. The inspiration for this action comes from the similarity of the situation in the drama “Waiting for Godot” by Samuel Beckett and the European integration process of RNM. Although at first glance it may sound frivolous, ridiculous and absurd, there are still huge similarities between the two actions – the one in Beckett’s drama and the one in the state of Macedonia on its path to European integration. 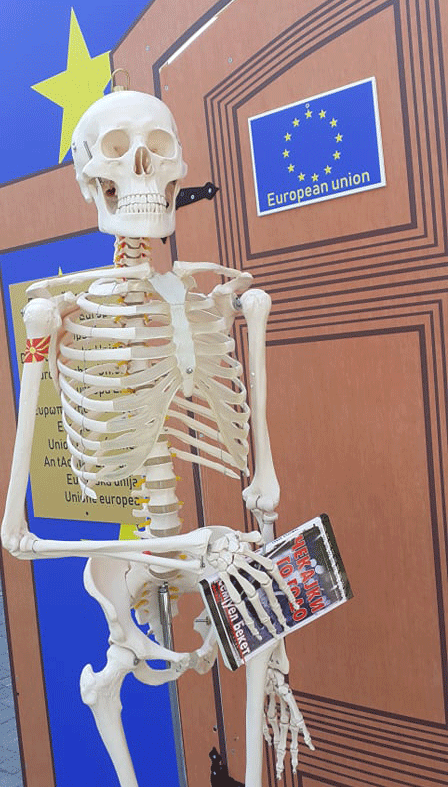 Just as Vladimir and Estragon (the main characters in Beckett’s drama) have been waiting for hours and days for Godot to come and clarify their dilemmas and solve their problems, Macedonia is waiting for the start of negotiations, the date for negotiations, the intergovernmental conference and whatnot for years, hoping that when the EU comes all our problems will be solved with the wave of a magic wand.

If we analyze the situation more deeply in Beckett’s drama we find further similarities with the situation with European integration because Vladimir and Estragon at certain moments are not at all sure if Godot told them he would come, and they are neither sure if they are waiting for him in the right place. We, Macedonians, in the same way, are waiting for the date for negotiations and constantly fulfilling some new conditions. We no longer know what we are waiting for, whether and how long we have to wait.